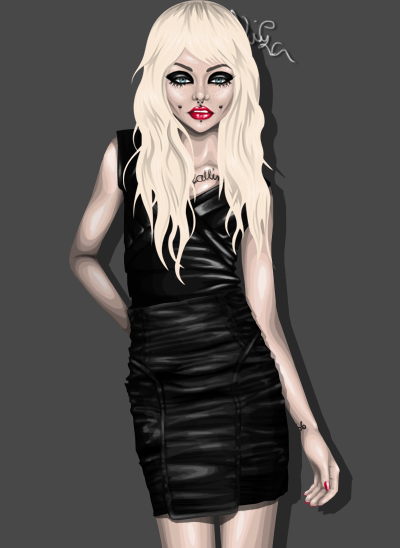 Oh look, haven't heard from that Lindsey-Girl for a while...
And now, you have. Hey guys, so I'm somewhat back. Of course, I'm not going to be regular until I get my laptop fixed (or get a new one), so don't expect too much from me. However, that's destined a change this Spring. So our house is almost about ready for move-in (the finale is scheduled for Mid-March, so very soon), and I'll have easier access to technology and whatnot.

Aside from the point, though. As you can see, I've been working on something. I'm sure those who've paid attention to a recent interview of mine, I'm working on a graphic for Stardoll's Appearance. Which, if I'm quite frank, just gave away what the graphic to the right is in context to. I think it's one of my better graphics, especially considering I haven't worked in photoshop for over two months. A mixture of a lack of both photoshop and inspiration is the reasoning behind that. Anyhow, I can't wait for the final product (I'm about 50% done with the graphic as of now), and share it with you guys. I have been working on my technique and refining it a little with this graphic, which I think shows. I would show a little bit more of the graphic, but I want the finishing product to be stunning, and more so a surprise. Along with that, I'm planning on editing the layout for SA (the previous theme had some URL issues, so I had to revert back to something simple), so I should be busy for the rest of the month with that in mind. And moving, too, but you probably already knew that.

So, any opinions on what I've shown you guys so far? I'm glad to be back, and hopefully most are happy for my return. Just a warning though, I'm not going to be nearly as active as I was before, real life's finally starting to have some appeal in it, believe it or not.
SUBMITTED BY Anonymous at 5.3.14 4 comments: