A friend of mine, Tania (cooldeer123) asked me to make a header for her blog, and I gladly accepted the offer. I haven't done headers for other persons before so I was kind of scared because many people would visit her blog and the first thing popping up is the header. I kept asking my self: What if it's not good enough? What if people don't like it? But then I started making the graphic. At first I thought it's going to be a fail and I should quit before it's too late. But then I decided to make a blazer instead of a dress and in my opinion, it turned out gorgeous. Plus Tania's medoll is gorgeous. 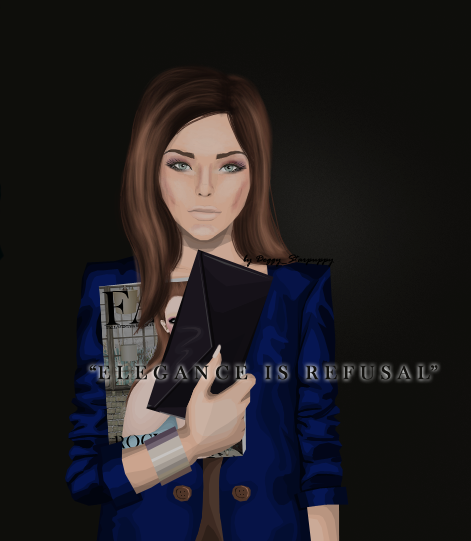 To be honest, I think this is the best graphic I have ever made. I simply love the blazer shading. The skin shading is alright too, even though I could've worked better on it. Oh and I almost forgot: this graphic is a SPOILER. If you come to think of it, you can see the model holding a magazine. It's my FAME Magazine and that was going to be the cover of the Fall/Winter Issue. I'm not sure I'll publish it though.

The hair is not stardoll-based, as usually because I just can learn that technique D: But I believe it turned out really well (in my opinion). The little purse/clutch (whatever that is) she is holding looks simple but realistic.

"Elegance is refusal" are Coco Chanel's sayings. I saw it on Tania's blog and decided to include it in the banner. But this is not how the full header looks. This is just a banner, much more like a preview of the header.

I would really appreciate feedback, constructive critz and your opinions :)
SUBMITTED BY Harley Quinn at 16.11.12