Recently, a popular trend going around is Dip-Dye.
Although I'm not a fan of it, I've had people ask if I'm able to do it for their graphics.
Well, I tried: 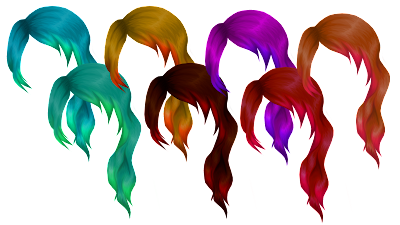 Here's a few special colors of my dip-dye venture.

The original is the last one(top right)
My favorite it the Dark brown hair with the red streaks. Love it!


Also, here's a note to the readers:
READ THE POST! I've noticed most people don't read the post when commenting. I've had to correct four people and explain that when they said, has already been written in the post.
If you read the entire post, you might understand some things about the graphic, such as:
The idea behind it, the original(if it's just a preview), and the tools used.
You'll look smarter if you seen something that ISN'T already written in the post.
Just saying...
Just. Saying.